The Celebrity Eclipse cruise ship does its maiden voyage into Antarctica so does we. The ICE continent welcome us with fantastic climate. The caption said he came here 6 times and never seen this clear climate. The sun was there full day and freezing temperature alongside made the day wonderful.

Surprisingly there was no darkness in Antarctica. Though sun came around 5am and set around 10pm there was no dark night at all. Even 12am midnight look so bright that we do not need a light. Caption also said this is a record setting voyage because Celebrity Eclipse is the biggest ship Antarctica seen ever. Along with passengers the crew of the ship also seeing Antarctica for the first time and can see then running here and there to take pictures.

I was so jealous of the expedition ships sailed around because they land in Antarctica. Unfortunately because of environment protection concerns the bigger ships were not allowed to land in Antarctica and it does apply for our ship as well. So as per our itinerary we will be just cruising inside Antarctica mountains for two days.

The Schollart Channel welcome us with its cool breeze and floating ice cubes everywhere… some are small… some are large like mountains… There were many living things just playing  around the ice cubes. They stopped the ship in Paradise Bay where the most expedition ships does landing.

Penguins were living a cute and cuddly life here… The current climate they call it summer and it was freezing out there. I feel the fingers get freeze after a minute without gloves.

After the voyage days on Antarctica they gave a certificate to everyone on board. 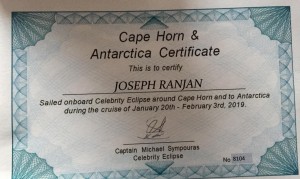